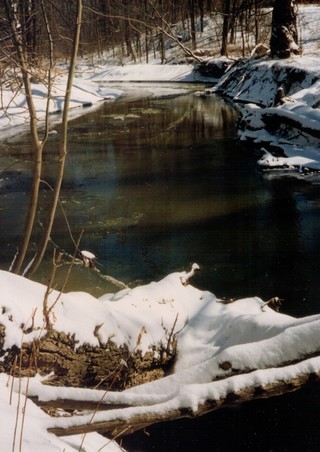 When our daughter, Laura, was in fifth grade, her class at Macarthur Elementary School in Southfield joined a scientific study monitoring the health of rivers nationwide. One measure of river health is temperature. Since our family lived on the Rouge River, our job was to take a water sample and measure the air and water temperature once a week.
That is how I was down at the river at 9:36 a.m. on a cold winter morning lowering a thermometer on a chain into the water.
How cold was it? The air temperature was four degrees above zero. It was so cold I had to crack the ice open with an ax. When I lifted the ax out of the water, droplets froze instantly on the ax head.

If you go to church some time before Christmas, you may hear about John the Baptist. In the Bible readings for Advent, John's job is to get people spiritually ready for Jesus. John had one message: "Repent." Which means to turn around, to change focus or direction.
John was blunt. He told people that if they had two coats, they should share with someone who had none. He told soldiers not to extort money by threat. He told tax collectors not to collect more than their due. He told religious leaders that they could not count on their ancestry to save them in the coming judgement.
"The ax is lying at the root of the trees," John said. "Change your ways."
It was always uncomfortable when I had to preach about John in a season of feasting and merriment. What a killjoy, we would say over the clink of our glasses and the passing of the hors d'ouevres. Who invited him?

And yet.
Sometimes we need someone like John to tell us a hard truth.
The Austrian writer Franz Kafka once said that there is a "frozen sea" within each of us, "a deep and cold conviction that [we] cannot love or be loved." John the Baptist is the ax to crack open that frozen sea.
Whatever the world tells us about wealth, status, power or possessions, the only true measure of our health as human beings is our capacity to give and receive love. A love that shares what we have, refuses to use our power to hurt others, and does right by our neighbors.

This year, as we get ready for Christmas, may we be full to overflowing with that kind of love.

My favorite line: "The only true measure of our health as human beings is our capacity to give and receive love." True Gold.