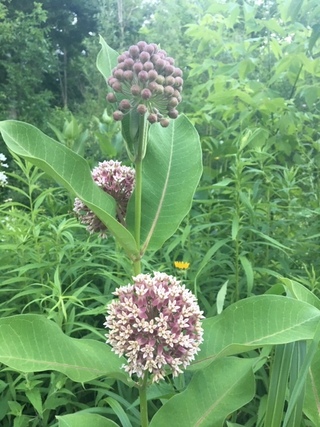 I know I owe you a post about whether to keep supporting global United Methodist missions, but today I just want to talk about summer. I took a walk last night at sunset along Mill Creek on the Border to Border Trail that goes through Dexter, Michigan.

Oh, it was beautiful: the slantways sun haloing the grasses along the creek; the glug and burble of water over rocks; the gray clouds piling up in the north and west; the red-winged blackbirds swinging on cattails with their demanding trill, "Look, look at me!" Bicyclers sped up the trail toward the fireworks display at Hudson Mills Metropark. One group was pulling a child's trailer, packed not with a baby, but with gear. "Looks interesting up ahead," one man said. "Just so we've got our rain gear and beer," the other replied.

I was glad to be walking the trail alone, free to pause and look at whatever I wanted. I could scan for racoon tracks in the mud, admire the perfect sphere of a milkweed blossom, anticipate the plenitude of ripening black raspberries. Summer! Afterwards, it was fun to come home and tell Ed what I had seen, to report how a few people had lined their cars and lawn chairs in the parking lot of the township hall facing east toward the park. I had asked them if they could see the fireworks from there. A young father with blond hair said, "So we're told."
"How clever of you," I said to him.
"Are you going to watch?" he asked me.
"I don't think so – I'm not much for crowds."
"Me neither," he said. He swept his hand to indicate the row of their chairs. "That's why we're here." He smiled. "We'll see you if you come back."
What a nice invitation! The clouds darkened, though, as we spoke, and I doubted I'd return. I was tired, and wanted to go home.

Later, rain came down heavily, straight down in sheets, in pillows and blankets. I imagined them scrambling for their cars, and was even more glad I'd gone home. Still, the fireworks watchers would have stories to tell their co-workers in the morning about their drenched clothes, and the puddles, and the mud. Maybe the mother would be cross, saying, "This was a stupid idea," but I like to think that the children laughed and danced as they got spattered by the warm rain, exulting in being out late with their parents, steam rising from the pavement and the green scent of wet woods billowing toward them.

Being at the park earlier that evening, alone, had brought out the kid in me – choosing my footing with care, balancing my weight, I had hopped on stone after stone into the fast-moving current, getting as close to the whitewater as I could. A man walking his dog laughed to see me – a grandma playing in the creek.

When a grandmother plays, her grandkids will learn to laugh, play and love too. We cannot let the serious struggles of our times cause us to lose our capacity for joy and delight!