A Change in Plans 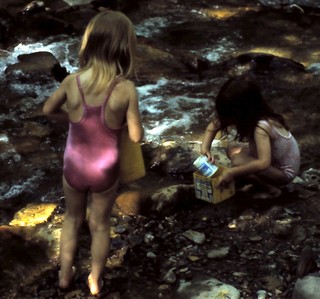 Laura & Barbara playing in Silvermine Creek by one of our campgrounds

When our daughters were three and four, we went on a month-long camping trip along the Appalachian Mountain range from Georgia to Maryland. Our plan on this "Month of May" adventure was to canoe as many spring-running whitewater rivers as we could before the girls were in school. Multiple factors had to align for our plan to succeed: weather, water level, shuttle, child care, and appropriate degree of difficulty for our skills.
When we were at Harper's Ferry, for example, we hoped to canoe the Staircase section of the Shenandoah River. We found a reputable day care that would accept drop-ins, so childcare was arranged. But the Shenandoah was near flood stage. Seeing us look longingly at the rollicking current, a ranger told us they'd rescued a kayaker by helicopter from that section the day before.

Okay. Maybe not.
He suggested we try Antietam Creek, a Class I-II stretch that went through the Antietam National Battlefield. Sigh. Being adrenalin junkies, we'd hoped for a more challenging run.
But Antietam Creek turned out to be one of the most interesting trips of our month. Paddling through the green fields flanking the river, thinking of the soldiers who'd fallen here, we were filled with sadness and reverence. 23,000 soldiers had been killed or wounded here on September 17, 1862, in the single bloodiest day of the Civil War: part of the awful cost of ending slavery.
We floated under Burnside Bridge in silence.

However, later in the trip, after we sluiced through the remains of an old dam, we got our adrenalin spike anyway. When we eddied upriver behind the dam to look at the stonework, we saw a sudden blur of motion on the rocks.
"Backpaddle, backpaddle!" Ed shouted.
Dozens of snakes were waving their heads on the jumbled stones where they'd been sunning themselves. Some slipped into the water. Yikes. We were glad the girls weren't with us.
We learned two quite different things from our change in plans. The first lesson was easy: Don't mess with snakes. The second lesson took more thought: Honor the fallen. Remember those who have made the ultimate sacrifice. Their example will help us fight injustice where we see it. For the sake of all the children.

Honor the fallen so that we might fight injustice when we see it. I love this; so much!

You've packed so much excitement and interesting notions into such a compact piece. Brava!

Enjoyed your "A Change in Plans" with lunch today. You are such a fine storyteller, Sondra, and always offer your readers food for thought. Thank you!

Love the picture of your girls💜

Honor the fallen--Thank you, Sondra. Today on Veteran's Day I remember the fallen including my ancestors since 1775 who served in the U.S. Military Armed Forces (my 6th Great Grandfather leading the family list). Words to ponder by Father Pere Zenoble, a Christian priest and member of the 1682 LaSalle expedition through the Great Lakes region known for his insightfulness-"A nation may grow powerful through force of arms. It may grow rich through commerce, but if it does not grow equally strong in things of the spirit it can never be called civilized, and it must remain forever a wilderness." Appreciate you impacting our spirit with your vivid imagery of nature experiences and your insightful words.

Sondra, I visited the Antetium Creek and the Battlefield a few years ago. I can picture the setting very well- except for the snakes. I love the scripture and song pairing. Did the snakes help you see the connection?

Very appropriate for Veterans Day. Thank you. I had a similar experience while visiting Valley Forge when I was in seminary. Like there were ghosts all around.

This post bring up memories of a "summer solstice" bike ride we took from Harper's Ferry, though Antietam - I got separated and temporarily lost (these were pre-google map days!) because I missed a turn before one of the bridges. But I remember the joy and satisfaction of a memorable ride most of all.